How to Fillet - Step By Step Guide

This detailed, step-by-step tutorial will explain how to fillet a fish using one of the 3 filleting styles we teach on this site. The fish used in this tutorial is a red emperor but this same basic technique can be used to fillet a wide variety of fish species.

We suggest you also watch a video that demonstrates this fish filleting style.

This tutorial is meant to complement our many free fish filleting videos.

The First Fillet (side 1) Cut down towards the pelvic fin in a straight line. The cut should end at the belly of the fish just behind the pelvic fin as shown below. 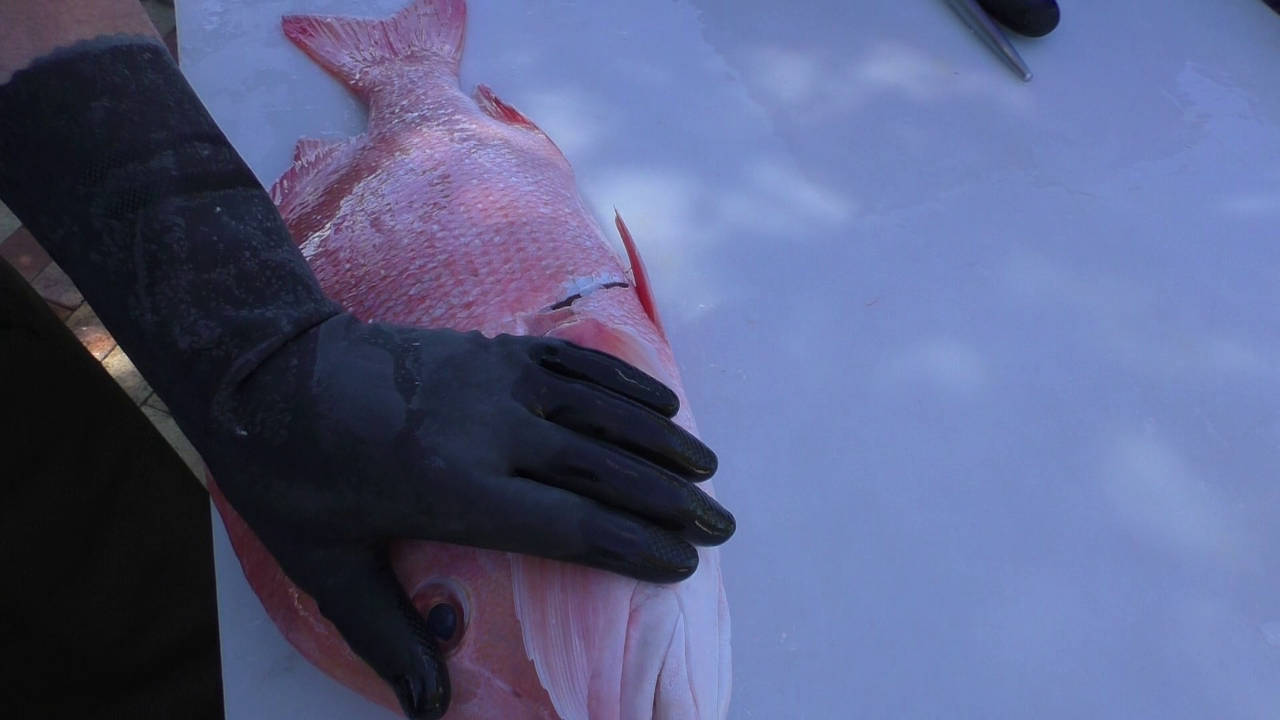 The next cut will go from the incision you just made up into the head of the fish. Place the tip of the blade into the cut at the pectoral fin and prepare to cut towards the head. 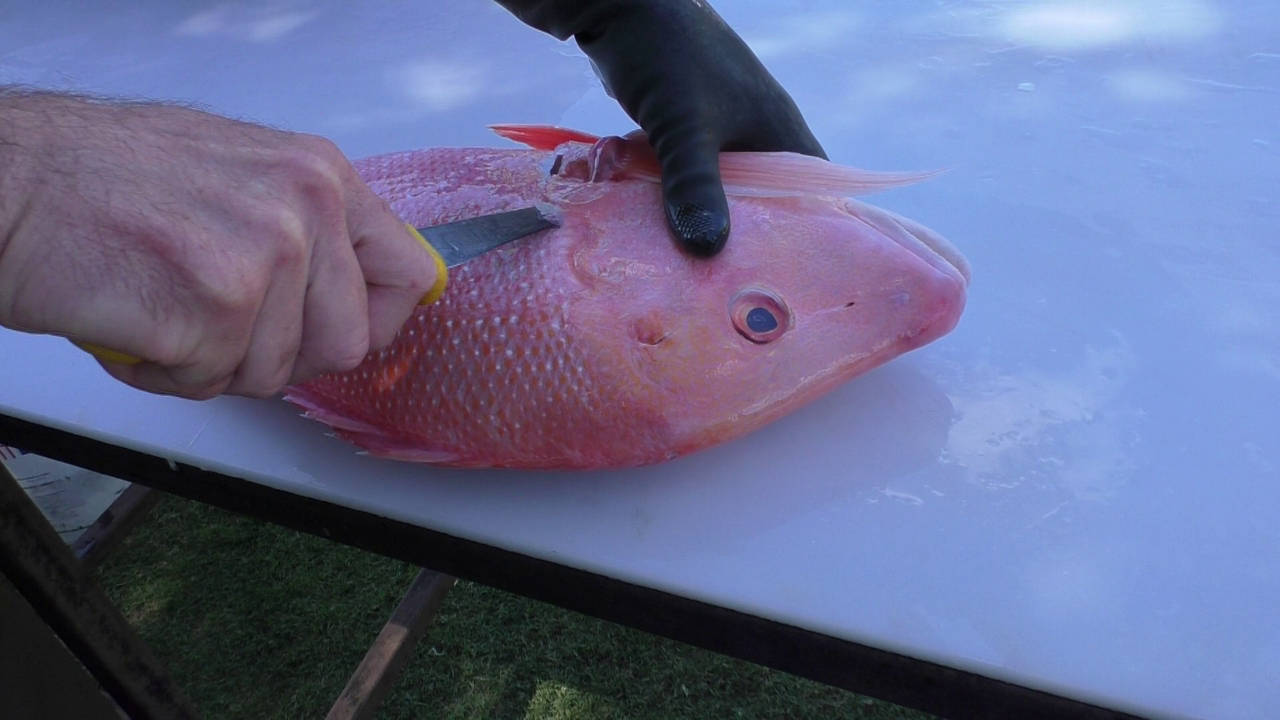 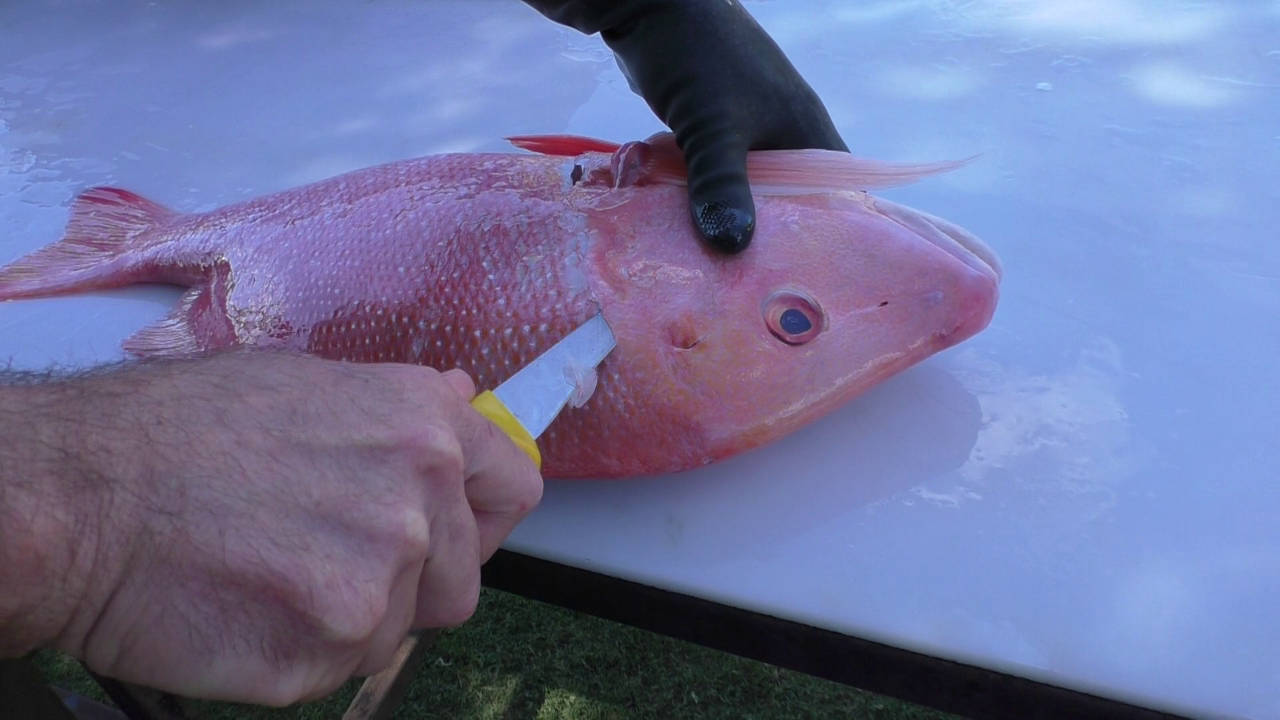 Once you reach about the level of the eye you can turn the fish so it is angled about 45 degrees from your body and cut right up into the head, which on a red emperor contains a large scallop of meat you can get out. The skin here is quite tough so it takes a bit of force. Note that when you fillet other species of fish using this technique you may not be able to extract quite so much head meat as this varies quite a bit from species to species. Red emperor have lots of head meat! Once you have cut as far up into the head as possible twist the knife around and prepare to cut down along the dorsal spines. You will now run the knife down the dorsal spines to the tail. Note the angle of the knife and the fact that you are only cutting with the first 2-3 cm of the blade. Continue to slide the knife along the dorsal spines towards the tail, press down reasonably firmly but allow the knife to slide as smoothly as possible. For most people this is where things begin to go wrong so take your time and if your knife catches on bone just stop, re-adjust and try again. With practice you will be able to slide the knife along the spines smoothly; it's just a matter of getting the angle and amount of pressure right which you will learn with practice. 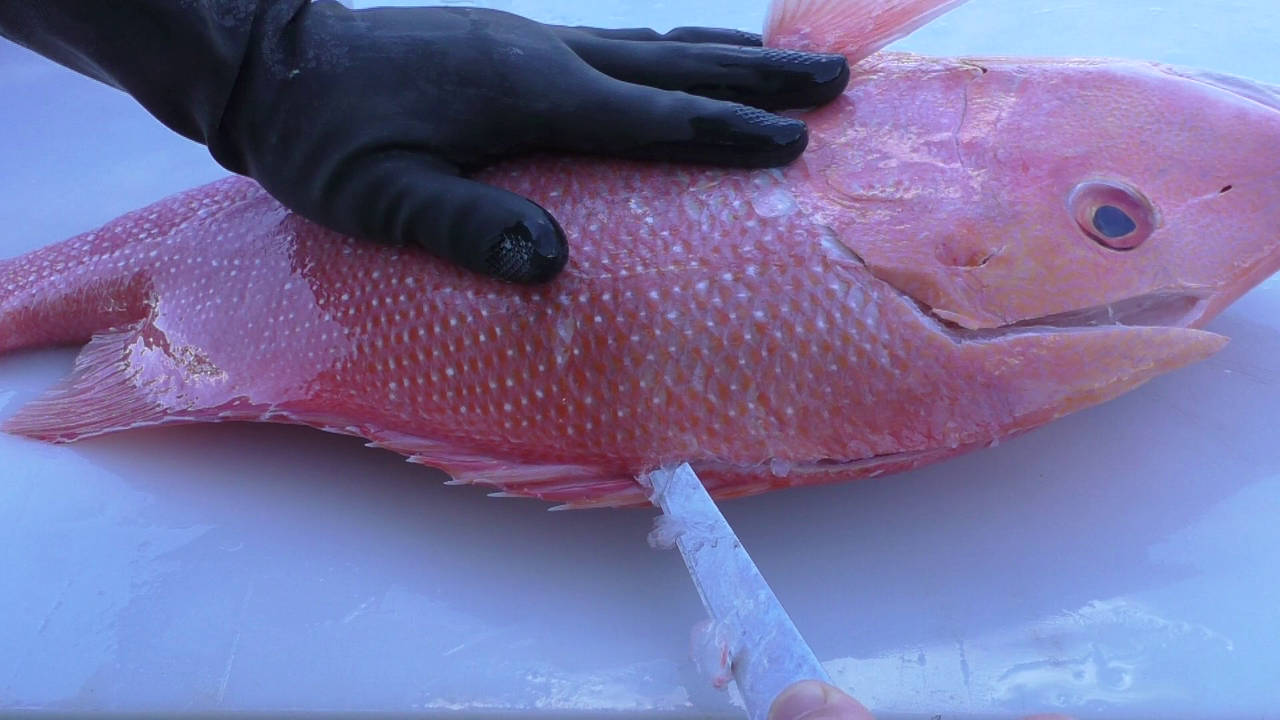 Continue cutting until you get to the narrow part of the fish where the tail begins; a bit further down than shown in the picture below. 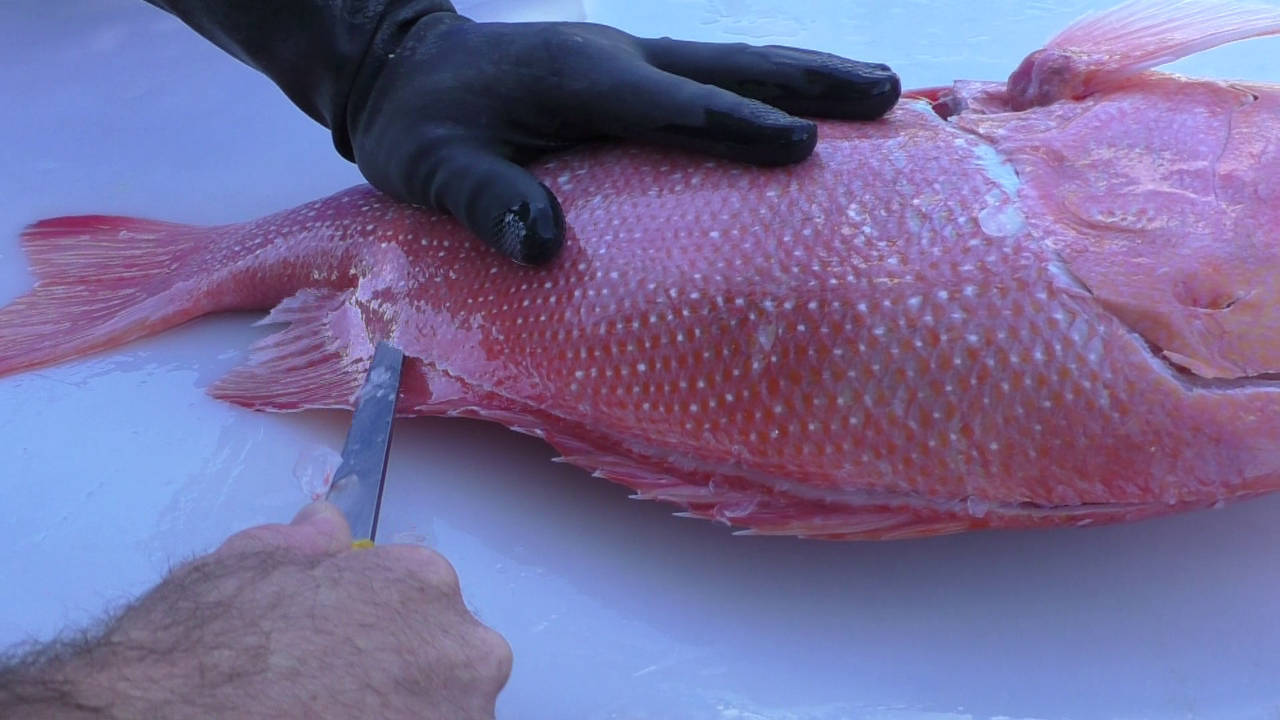 Once you reach the tail push the knife forcefully all the way through (over the spine) and out the other side. 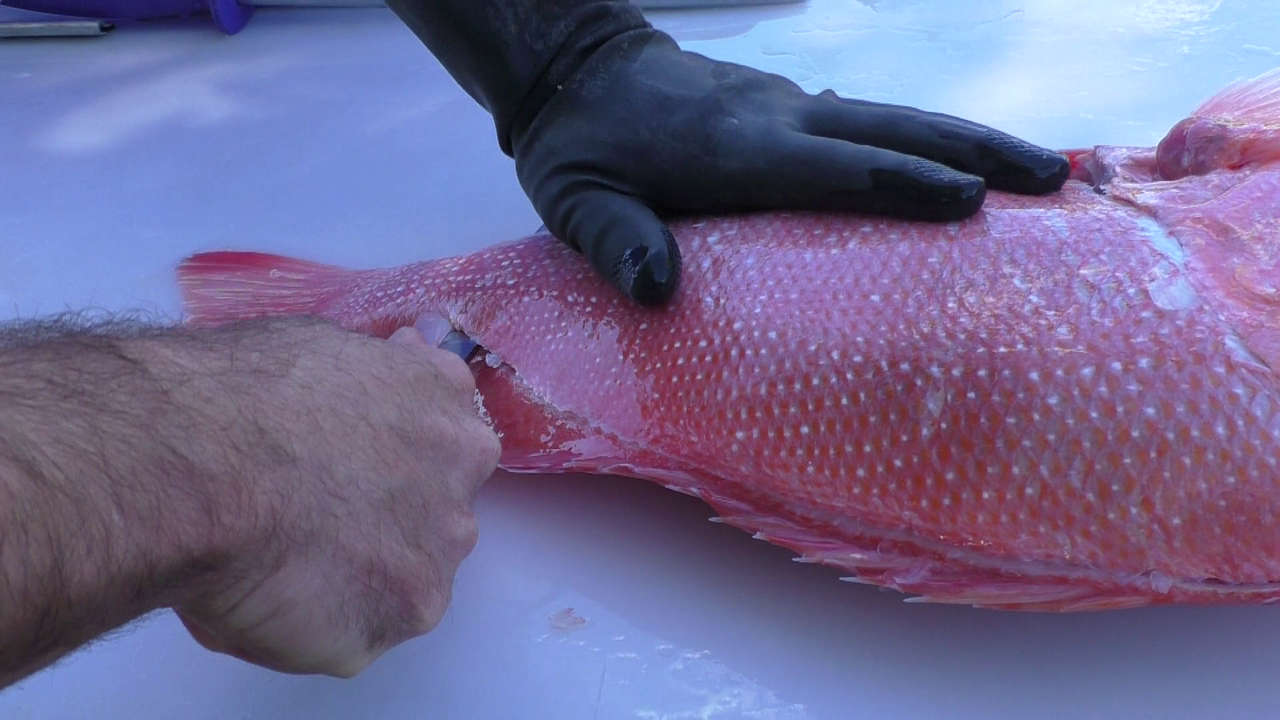 With one motion cut out towards the tail until the knife is clear. 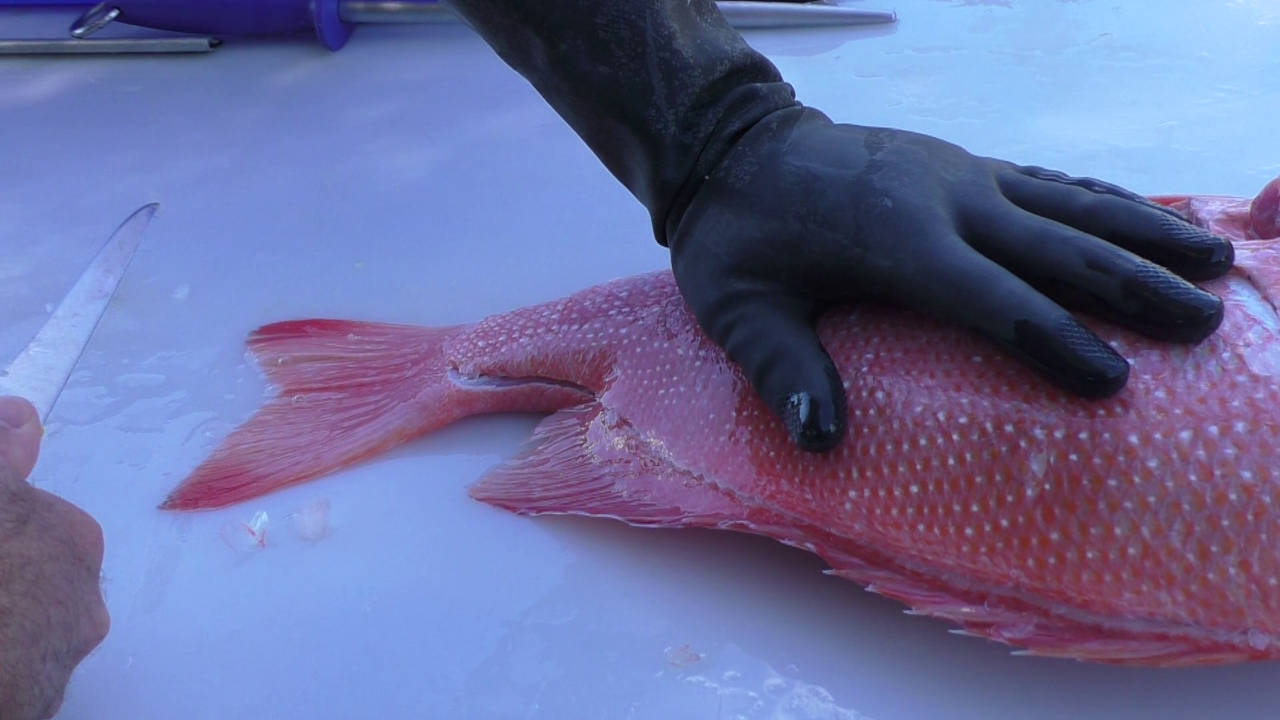 Now you need to clear all the meat away from the frame down to the spine of the fish. Place the knife back in at the top near the head. For this step you will be swiping the knife down using a few sweeping motions down towards the tail. You must keep the knife pressed firmly down onto the bones to ensure you pick up the flesh on your fillet and leave nothing behind. Using long sweeping cuts slide the knife down in the direction of the tail, keep the blade pressing down on the bones with just enough angle to slide over the bones without cutting into them. These cuts need to go right down to the backbone of the fish which you will be able to feel with your knife, basically the backbone should stop the knife from cutting any further. Continue swiping down until you reach the backbone and do this all the way down to the tail. Now that you have cleared the meat away from the bones down to the backbone raise the fillet up with your left hand ready for the next step. If you have completed the previous step correctly all the flesh will be cut away down to the backbone (but no further) as shown below. What you will do now is just make a few small nicks along the spine to clear over the backbone. The purpose here is just to cut up over the curve of the backbone with very small cuts using just the tip of the knife angled slightly upwards. With practice this can be done in one or two quick sliding motions but take your time if you are just learning. Start with the knife pressed into the backbone up about level with the base of the ribcage of the fish. Now carefully nip away with just the tip of the knife and clear the meat over the backbone itself, keep the fillet raised up so you can see what you are doing and get the knife in easily. Continue this all the way down to the tail. Remember the goal here is simply to cut over the curve of the spine ready for the next step. Now you have cleared the flesh down to (and over) the spine, so the next step is to follow the bones out on the underside of the fish. Raise the fillet up with your left hand and place the tip of the knife in over the top of the spine just at the base of the ribcage. Check the picture below for the correct position and angle of the knife, note how the knife is over the spine and angled downwards ready to follow the bones out. Begin to cut down towards the tail, sliding the knife across the top of the bones and pressing down firmly. Make the first cut a long one but dont try to go too deep, just slide along the top of the spine with the knife angled down as shown in the picture. Clear all the way to the tail with this first cut. 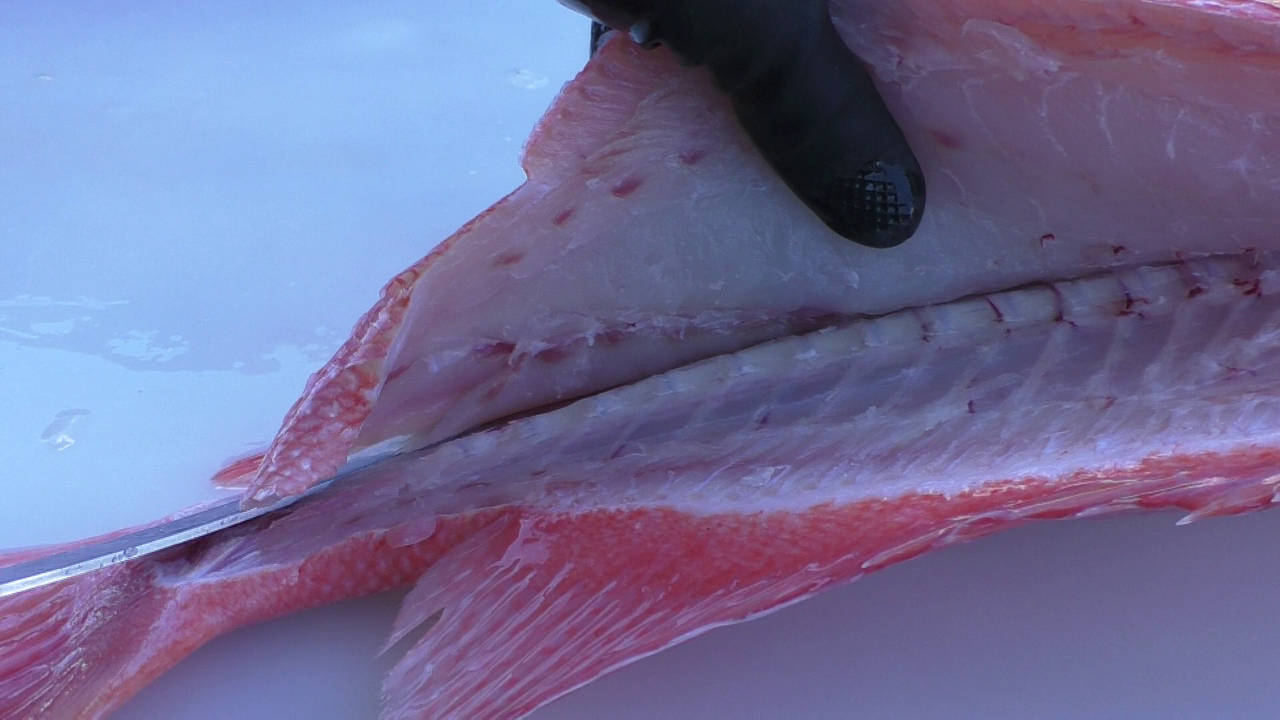 Now the fillet can be raised higher ready to place the knife back in for the final cut. Slide the knife back in up at the base of the ribs as shown below. Now cut down along the bones and out towards the anus clearing more of the fillet away as you go. When you are finished the fish will look like the picure below, with all the flesh cleared away leaving only the ribcage and belly still attached. For a list of filleting tutorials organised by species check out the Fillet Fish Australia Video Tutorial Library.